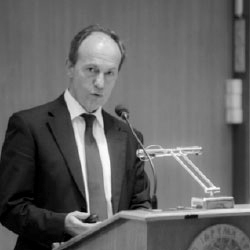 Mr. Kokkinoplitis studied Mechanical Engineering at the University of Manitoba, Winnipeg, Canada (BSc in Mechanical Engineering and MSc in Materials Science Engineering).
He started his career as leading engineer at MIRTEC S.A., where he provided consulting services to manufacturing industries for the implementation of R&D programmes and development of new materials. From 1990 to 1998, he was Director of the R&D Department at the multinational company BiC VIOLEX S.A. His principal assignment was to implement large-scale research projects, transfer know-how to the company’s units, develop new products and innovative assembly line processes, and register intellectual property rights for research results in Greece and 60 other countries all over the world.
Mr. Kokkinoplitis has served in several management positions of high responsibility in the public sector too. Indicatively, as Head of the Managing Authority of European Territorial Cooperation Programmes and later on as Head of the Managing Authority of the OP “Competitiveness & Entrepreneurship”, he managed numerous co-financed projects, the overall budget of which exceeded 3.6 billion euros.
During the period 03/2011 - 08/2012, as Secretary General for Research & Technology, he was in charge of developing a policy of research and technology in all scientific fields, in order to promote innovation as key-force for restructuring the Greek economy. To achieve this purpose, he focused on increasing private-sector participation in research and innovation and improving the capacity of Greek Higher Education Institutes and research centers, thus bridging the innovation gap and minimizing the brain drain phenomenon. Within this framework, he also collaborated with international counterparts and promoted RTDI strategic alliances with countries such as China and Israel, by facilitating academia - industry cooperation through bilateral large-scale projects.
After such a successful career in the area of research and entrepreneurial development, Mr. Kokkinoplitis founded RISE (in 2013) and Seven Sigma (in 2016), two highly dynamic consulting firms with expertise in innovation management, new product development processes, open innovation and research policy-making. In his position as Director, he leads the accomplished consultants of RISE and Seven Sigma with a view to helping commercial, government and non-profit organizations not only to solve crucial problems but also to innovate faster, more cost-effectively and with less risk.
Back